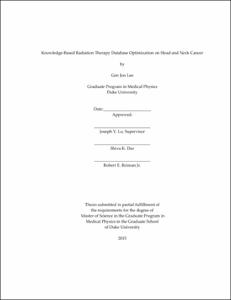 Intensity modulated radiation therapy (IMRT) is commonly used to treat head and neck cancer but relies on the experience and skill of the treatment planner. Previous knowledge based radiation therapy (KBRT) used a database of 105 patient cases from Duke University Medical Center to derive the constraints and fluence map to be used as input into Eclipse. Because IMRT relies heavily on the treatment planner, a re-optimized database was created to further improve the current database and its results.

Each of the 105 patient cases was re-optimized to further lower the dose to organs at risk while keeping the planning target volume (PTV) homogeneity. Out of 105 patients, 41 had noticeable improvements and 64 had minimal or no difference. The previous versions of KBRT were used to find the matching patient based on geometry and to derive constraints that would be inputted into Eclipse for optimization. Two methods of KBRT were tested. The first method used a dose warping algorithm to compute constraints and the second method used constraints from the matching patient.