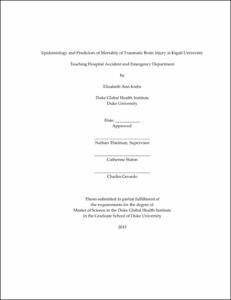 Traumatic Brain Injury (TBI) is a leading cause of death and disability. TBI patients in low and middle- income countries (LMIC) have twice the odds of death than in high-income countries. There is limited data describing the epidemiology and mortality predictors for TBI in LMIC.

GCS <14, hypoxia, tachycardia and age >50 years were associated with mortality among TBI patients at KUTH A&E. These findings can guide clinicians in prioritizing care for patients at highest risk of mortality.