Modeling Land-Use in Georgia: Threats to Biodiversity and Opportunities for Conservation 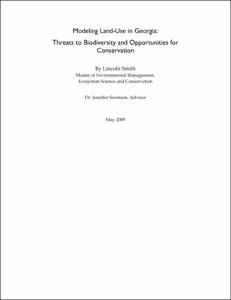 View / Download
39.8 Mb
Date
Author
Smith, Lincoln
Advisor
Swenson, Jennifer
Repository Usage Stats
492
views
158
downloads
Abstract
Recent surges in suburbanization, population growth, and conservation funding have transformed the conservation landscape across the United States. Where once small local land trusts dominated the conservation community, there are now numerous national land trusts that are pushing expansive agendas and planning at a variety of scales. These land trusts have turned to more detailed conservation planning and threat analyses to identify the most valuable lands, and threatened ecological communities. In an effort to increase awareness about threat analysis and strategic conservation planning, I conducted an analysis within two regions of Georgia: the coastal counties and the greater Atlanta area. It was my goal to use urban land-use modeling to predict threat of land conversion, and combine this with conservation valuation to set priorities for biodiversity conservation in Georgia. My approach produced urbanization trends for two land-use change models, a multi-criteria evaluation and a neural-network analysis model, for the 14 years proceeding 2005. I determined patch level conservation values using multiple variables, including vertebrate species richness and a number of conservation metrics derived from literature review. The land-use change models resulted in realistic amounts and patterns of change for both areas, but validation of these urbanization models using urban growth between 1991-2005 produced relatively poor accuracies for the coastal counties (kappa statistics < 0.26), and fair accuracies around Atlanta (kappa statistics > 0.40). Even though these two models performed similarly, the MCE was easier to manage and implement then the LTM. Examination of the conservation values of habitat patches found higher values for the coastal counties. Comparing conservation variables between the coast and Atlanta regions there were significant differences in species richness (p <0.05) and patch integrity (p < 0.05). When the urban threat analysis was combined with conservation valuation in the Atlanta region, I found that only 33 of the 570 high conservation value patches also faced high levels of threat. In conclusion, the multi-criteria evaluation technique showed promise as a relatively easy way to model urbanization across a landscape and could be useful for conservation planners across the country. In contrast the LTM was often difficult to work with and had a steeper learning curve, which will likely hinder any widespread use of this model. The combination of conservation valuation with threat analysis proved to be very powerful as it drastically reduced the number of high priority parcels and simplified choices. Conservation practitioners should take note of these findings, for they show that simple methods can be as powerful as more complicated techniques for conservation prioritization and land-use modeling.
Type
Master's project
Department
Nicholas School of the Environment and Earth Sciences
Permalink
https://hdl.handle.net/10161/1001
Citation
Smith, Lincoln (2009). Modeling Land-Use in Georgia: Threats to Biodiversity and Opportunities for Conservation. Master's project, Duke University. Retrieved from https://hdl.handle.net/10161/1001.
Collections
More Info
Show full item record