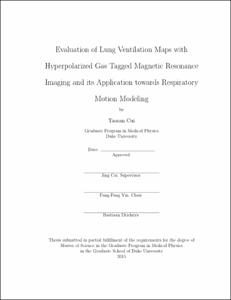 Purpose: Direct measurement of regional lung ventilation is often more favorable than the calculated ones using deformable image registration (DIR), which has been found susceptible to many uncertainties. This study aims to investigate the possible implementation of a novel imaging technique, 3D Hyperpolarized (HP) gas tagging MRI, to evaluate the regional ventilation of lung calculated with DIR-based algorithms, and to model the respiratory motion of lung towards 4D digital phantom application, respectively.

A ground truth of displacement vector field (DVF) was obtained by tracking the location of each tagged grid between the exhalation and the inhalation t-MRI images. Meanwhile, p-MRI images were registered with two commercial DIR algorithms, Velocity AI and MIM, to generate the corresponding DVFs. The regional ventilations were calculated as the Jacobian of each DVF. The cross-correlation and the mutual information were computed between either the DIR-based and the ground truth ventilations for comparison.

Regional ventilation of lung, as a physiological property, should remain invariable during the image acquisition. Therefore, in order to develop a realistic model for the respiratory motion of lung, the optimization of the DIR-based DVF was performed by imposing a regularization on the regional ventilation of lung. The robustness of the proposed model was evaluated by comparing the optimized DVF to the original DIR-based DVF in cross-correlation and mutual information.

Results: Compared to the ground truth result of the 3D HP gas tagging MRI, the regional ventilation maps calculated using the commercial DIR algorithms varied considerably for all the subjects of different respiration amplitudes. The ventilation derived from Velocity AI was preferable for the better spatial homogeneity and the larger accuracy, given by the higher average cross correlation (0.328 v.s. 0.262) and average mutual information (0.528 v.s. 0.323).

The results suggest that direct measurement of lung motion using 3D hyperpolarized gas tagging MRI may have the potential to assess, validate, and improve the DIR-based application. The proposed 4D motion model of lung also holds great promises for the implementation in a digital phantom, which can be applied in versatile researches for 4D radiation therapy of lung cancer.