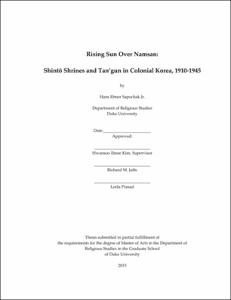 From 1868-1912, Japan underwent a rapid transformation into a modern nation state. This period of time became known as the Meiji Restoration, and practically all aspects of social and political life were affected including Japan's indigenous religious tradition Shintô. As a consequence of reform, Shintô was distilled into two broad categories--state and sect Shintô--with the former being associated with the Japanese State policy and projects. In particular, State Shintô would be utilized in assimilation attempts on the Korean peninsula.

In 1910, Korea was formally annexed and made a colony of Japan until Japanese defeat in 1945. During the roughly thirty-five year-long colonial era, Japanese officials sought to use state sponsored Shintô Shrines as a means to transform Koreans into loyal colonial subjects. The premier Shintô Shrine in Korea was the Chôsen Shrine erected in 1925 and housed the spirits of the tutelary Shintô Deity Amaterasu-Ômikami and, Emperor Meiji. This decision was not without contestation however, as a certain priests and the Japanese intellectual Ogasawara Shôzô (1892--1970) instead argued for the enshrinement of Korea's own progenitor god Tan'gun thinking that a native deity might make Shintô more appealing.

To examine this issue, this thesis will investigate several aspects: First, this thesis shows the development of a state sponsored Shintô and how this shaped colonial assimilation policies on the peninsula. Secondly, it examines Ogasawara's thought behind his reason to enshrine Tan'gun in Chôsen Shrine. Thirdly, this thesis explores Korean understandings of Tan'gun mythology and how this was utilized to create a Korean sense of uniqueness.

By examining these topics, this thesis aims to express a Korean voice in regards to the enshrinement issue. This thesis demonstrates that Korean agents during the Japanese occupation were able to construct their own understanding of Tan'gun through academic and religious avenues. This native agency in the matter would mean that even if Tan'gun had been enshrined, the implementation of State Shintô in assimilation efforts would still have been largely unsuccessful.