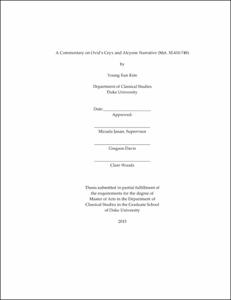 This thesis seeks to analyze the longest story in Ovid's Metamorphoses, tale of Alcyone and Ceyx. Despite its length, its placement within the entire work, and the presence of the work's eponymous hero, Morpheus, the Alcyone's and Ceyx' story has no major commentary in English and has earned little attention from most scholars. What has been written on it often scants the darker details of the episode, persuaded that Ovid has here sketched a portrait of an ideal, happy marriage, albeit one crossed by circumstances. In order to counterbalance this overly optimistic reading, this commentary carefully analyzes the language, motifs, and intertextual references that thread through Ovid's version of the Ceyx and Alcyone story. Particular attention has been paid to: the ambiguities in Ovid's narrative of Alcyone's attitude towards parting from her husband; the story's portrait of the gods, including Alcyone's own father, Aeolus; allusions to the earlier epic tradition (Iliad, Odyssey, and Aeneid) in the Tempest scene; and the ecphrasis of the House of Sleep, including the character of Morpheus. This analysis will show that the tale of Alcyone and Ceyx is not a simple encomium to marital fidelity, but a picture of conjugal love darker than most Ovidian scholars have suspected.