What's Cooking?: A Mixed Methods Study of Health Perceptions and Use of Improved Cookstoves in Rural India 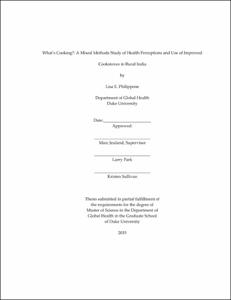 The burning of biomass (wood, dung, charcoal, etc.) for cooking and heating is widespread throughout the world and is a major contributor to household air pollution (HAP). Biomass fuels are often burned in inefficient stoves and rooms with poor ventilation, contributing to respiratory illnesses, local deforestation, and global climate change. Improved cookstoves (ICS) are advocated as an effective remedy for the effects of HAP. In this study we examine attitudes associated with ICS and traditional stoves among households that purchased an ICS and households that did not. We employed a mixed-methods study between June 2012 and November 2014 in the Himalayan region of Uttarakhand, India. We conducted 2,038 household surveys and 28 in-depth interviews that included questions about environmental and stove-related perceptions, household socio-demographics, stove and fuel use, socio-economic characteristics, risk and time preferences and a 24-hour biomass fuel weighing exercise for monitoring of fuel consumption. This analysis focused on 1) cooking practices 2) stove and fuel use 3) positive and negative attributes of ICS and traditional stoves 4) perceptions of health changes from use of ICS and 5) knowledge of local diseases and health. Quantitative analysis consisted of multivariable logistic regressions with survey data and qualitative analysis employed applied thematic analysis of transcripts from primary cook interviews.

More than half of all households in the qualitative sample reported belief that there is no health impact from using an ICS. Smoke from traditional stoves is considered a normal aspect of daily life. Misconceptions of local diseases, causes, and cures are pervasive and impact perceptions of health. Female respondents were most likely to comment on smoke as unsafe for their health and the cleaning requirement for their traditional stove as a negative feature. Respondents complaining of ICS fuel cost (including electricity bill) and relative wealth of the household were significantly related.

It is clear that households subjected to this stove promotion campaign remained unconvinced that smoke from cooking is an important threat to health. Therefore, we must target households using strong educational campaigns about the effects of smoke in the home, making clear that smoke does not have to be a normal aspect of daily life, and is a health threat that can be eliminated. Wide variation exists among ICS users and their reasons for using or not using the ICS, which suggests the need for additional research on preferences and perceptions before scaling up or implementing similar ICS interventions in this region. Future cookstove intervention programs will benefit from this improved understanding and help inform more effective design of future programs to enhance sustained use of ICS.