"Testing for Your Own Good": HIV testing As an Intervention Among Men Who Have Sex With Men (MSM) in Northwestern China 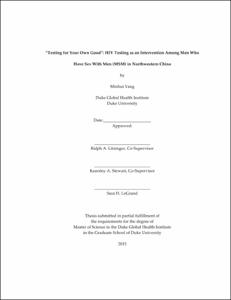 Since 2005, China Global Fund AIDS programs have considered men who have sex with men (MSM) an "at-risk population" with priority and significance to receiving HIV testing. Community-based organizations (CBOs) have been involved in implementing the intervention programs, including free HIV testing, to MSM. This thesis explores the consequences of HIV testing as an intervention on local MSM's perceptions and relationships. Participant observation, in-depth interview and textual analysis were conducted during fieldwork research at a local CBO. It is argued that the complexities of everyday practices of public health programs at the community-level need to be emphasized in supervision. The success of China's HIV/AIDS intervention strategies is at stake: free HIV testing needs to be implemented as a benefit to testing receivers' health instead of as an obligation or commodity. In everyday practice, HIV testing is full of complexities and via HIV testing, interrelations among CDC system, local CBOs, and local MSM are reproduced and images and perceptions of free HIV testing are reconstructed. Moreover, receiving HIV testing was integrated into a new moral discourse of how to be a "good" MSM. It is recommended for local CBOs to cultivate their professionalization, and be aware of new stigmatization produced by free HIV testing. Meanwhile, a transition of local governmentality and supervision technologies is needed.