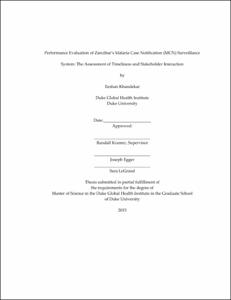 Malaria places a tremendous burden on the world's developing countries, with latest estimates making malaria responsible for 198 million cases and 584,000 deaths in 2013. Recent success in malaria control reducing prevalence across the world, however, has placed the goal of malaria elimination at the forefront of countries' malaria strategies. Malaria elimination is the reduction of locally acquired malaria prevalence to zero. Due to the risk each malaria case poses for onward transmission of malaria, quickly detecting and treating all cases of malaria is crucial for malaria elimination. As a result, a robust surveillance system that can track all cases in real-time should be at the core of any malaria elimination program.

One region embarking on malaria elimination is Zanzibar, a semi-autonomous region of Tanzania. Zanzibar has instituted a malaria surveillance system for elimination, termed the Malaria Case Notification (MCN) system in 2012. MCN relies on cell phone reporting to transmit data on all malaria cases detected at health facilities, and tracks all positive cases to their household to test all household members for malaria. As MCN is the core of Zanzibar's public health enterprise for malaria elimination, it should periodically undergo a performance evaluation. Following recommendations in the Centers for Disease Control and Prevention's (CDC's) Updated Guidelines for Evaluating Public Health Surveillance Systems, MCN has been evaluated for timeliness (hereafter called response time) a measure of the time-span between surveillance steps, and stakeholder interaction with MCN. As MCN is a surveillance system to support malaria elimination, response time is a critical metric by which to measure its performance. Furthermore, assessing stakeholder interaction provided the analysis of response time a context and identified roadblocks inherent in the surveillance system.

Using case data in MCN from October 2012 to July 2014, provided by RTI and the Zanzibar Malaria Elimination Program (ZAMEP), a time series regression was utilized to measure the association of response time with time. Results indicated that while on average, response time has increased in Zanzibar; it has mixed results at the district level. While the differences in the association of response time with time by the district could be a result of random variation in the data, it can also be explained by differences in the roadblocks stakeholders reported when interacting with MCN. However, due to missing data, a short time span of time-series data, and other limitations of the model, these results may not be robust.

Stakeholder analysis consisted of closed and open ended surveys and focus group discussions with district malaria surveillance officers (DMSOs), a cadre of health workers who are tasked with tracking malaria cases detected at health facilities to their household to test household members for malaria. The most significant issues that were raised by DMSOs were data records at health facilities missing contact and location information of detected malaria cases; reliance on public transport to complete surveillance tasks; misconception that malaria testing at the household was for HIV; and a variety of case prioritization methods used by DMSOs.

These findings indicate that while a surveillance system can automate data collection and reporting through the use of mobile technology, its performance will still rely heavily on health worker performance, community acceptance, and infrastructure within a country. To improve MCN, Zanzibar should proactively communicate to health facilities the importance of record keeping and engage with the community about the importance of malaria testing, among other things. These recommendations can be bolstered with further research on community perceptions on malaria testing. Taken together, these research and operational recommendations can strengthen MCN and strengthen efforts to eliminate malaria in Zanzibar.