The Double Narrative of Domestic Violence in Contemporary Russia 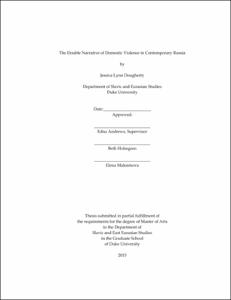 This thesis examines how domestic violence is talked about both in the Russian Federation after the fall of the Soviet Union and by the Westerners whom have offered their expertise on the matter. The first chapter shows how there is a divide between Russian journalists and Russian academic scholars in the way domestic violence is viewed and how they believe it can be resolved. Although they both share some consistent values, there is tension between whether a new enforced law can be preventive or if the need to prevention goes beyond the law. The second chapter discusses how Westerners from both the United States and the United Kingdom have used various methods of data collection to find out why the establishment of women's crisis centers have not been as stable and successful as they had hoped. It also explores how Western aid comes with specific standards and how the word `feminism' has become stigmatized in Russia. Both of these chapters use newspaper articles, journal articles, and interdisciplinary analyses of academic texts to show how domestic violence has become recognized as a major problem in Russia, and how both Russians and Westerners are searching for a solution to end the violence.

Conclusions show how there is still a need for dialogue between Russians who are trying to aid victims of domestic violence and Westerners who have been working in this field for many years. This thesis works as a meta-analysis to show the past and current dialogue happening between Russia and `Western' scholars.