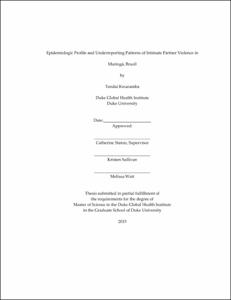 Background: Intimate partner violence is a global burden that disproportionately affects women and has more severe outcomes in women as well. Our objective was to explore the epidemiologic profile for intimate partner violence and preliminary patterns in the underreporting of this burden in Maringá, Brazil. Methods: A community-based cross-sectional study was conducted in Maringá. A convenience sampling method was utilized to recruit participants. 435 women at least 18 years of age who either currently had or had previously had an intimate partner were interviewed about their experiences with IPV. Sociodemographic characteristics were collected at the time of the interview to estimate associations with IPV using univariable and multivariable logistic regression models. Positive IPV cases identified from the community survey were compared with positive IPV cases identified from the Maringá city violence registry using sociodemographic variables and location variables in both datasets to explore patterns of underreporting. Results: Lifetime prevalence of IPV was 53.79%. Significant bivariate associations found between the SES indicator occupation and psychological violence (X2 = 8.688, p < 0.05) and overall IPV (X2 =12.441, p < 0.01) showed differences in distribution of IPV among the different levels of occupation. Significant bivariate associations found between the SES indicator number of children and physical violence (X2 = 6.963, p < 0.05) and sexual violence (X2 = 8.969, p < 0.05) also showed differences in distribution of IPV among the different levels of number of children. Women who had no paid work outside the home seemed to experience all 3 types of violence as well as overall IPV significantly less than women who had paid work outside the home (p < 0.05). Having 4 or more children was noted to significantly increase women's experience with physical and sexual violence (p< 0.01). Patterns of underreporting noted were associated with older age, women racially self-identifying as brown, and women being either illiterate, or completing higher education. Geospatially, IPV cases found through the community survey were ill-represented in the violence registry. Conclusion: IPV is a significant burden in Maringá and some underreporting patterns were noted through this study. These findings highlight the need for further research into conditional and precipitation risk factors of IPV and further exploring the burden and reasons for underreporting of IPV. Care settings can be potential sites for screening communities for IPV and exploring patterns in reporting of IPV.