Urban Biased Social Policies and the Urban-Rural Divide in China 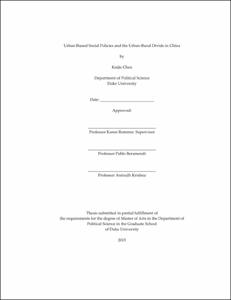 This thesis provides a case study of the urban-rural divide and its relationship to public polices in China. By utilizing multiple data sources from both government statistics and independent surveys, this study analyzes the influences of three public policies: 1) the household registration system; 2) the education system; 3) the healthcare system, on China's urban-rural divide in terms of the income gap, the educational inequality, and the healthcare inequality. The findings show that the urban-rural gaps in income, education, and healthcare are large and have been increasing since China's market reform of the late 1970s, and there is no clear evidence that these gaps will narrow in the near future. The persistent urban-rural divide is closely associated with the strong urban bias imbedded in the public policies. Specifically, the household registration system differentiates the urban and rural populations and provides privileges to the urban population in income and education. The education and healthcare systems further strengthen the gaps through their dualistic structures and different funding schemes implemented in urban and rural areas.