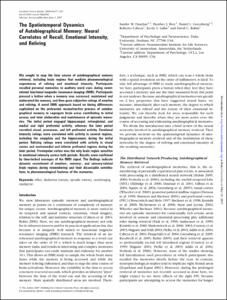 Juanita M. Kreps Distinguished Professor of Psychology and Neuroscience
For .pdfs of all publications click here  My main research interest has been in long-term memory, especially for complex (or "real-world") stimuli. This work includes the study of autobiographical memory
Alphabetical list of authors with Scholars@Duke profiles.