Experimental manipulations of the phenomenology of memory. 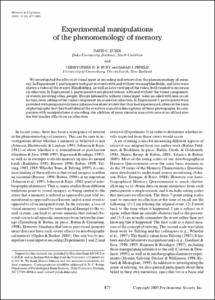 View / Download
160.3 Kb
Date
Authors
Rubin, David C
Burt, Christopher DB
Fifield, Sarah J
Repository Usage Stats
195
views
237
downloads
Abstract
We investigated the effects of visual input at encoding and retrieval on the phenomenology of memory. In Experiment 1, participants took part in events with and without wearing blindfolds, and later were shown a video of the events. Blindfolding, as well as later viewing of the video, both tended to decrease recollection. In Experiment 2, participants were played videos, with and without the visual component, of events involving other people. Events listened to without visual input were recalled with less recollection; later adding of the visual component increased recollection. In Experiment 3, participants were provided with progressively more information about events that they had experienced, either in the form of photographs that they had taken of the events or narrative descriptions of those photographs. In comparison with manipulations at encoding, the addition of more visual or narrative cues at recall had similar but smaller effects on recollection.
Type
Journal article
Subject
Adolescent
Adult
Cues
Female
Humans
Male
Memory
Middle Aged
Narration
Single-Blind Method
Surveys and Questionnaires
Visual Perception
Permalink
https://hdl.handle.net/10161/10119
Collections
More Info
Show full item record