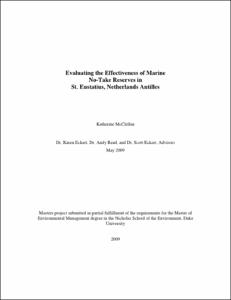 View / Download
2.4 Mb
Date
Author
McClellan, Katherine
Advisors
Eckert, Karen
Read, Andy
Eckert, Scott
Repository Usage Stats
368
views
449
downloads
Abstract
Marine reserves, in which exploitation of marine organisms and other human activities are restricted or prohibited, can be valuable tools for marine conservation and fisheries management. No-take marine reserves support greater density, size, and diversity of fishes than exploited areas, with most benefits accruing to heavily exploited species. Protected areas can also export biomass to sustain or increase the overall yield of adjacent fisheries. These effects can be especially significant for organisms with small home ranges, such as coral reef fish. Although there are many benefits to creating marine reserves they are also costly to manage and can infringe on people’s recreation and livelihoods. For marine reserves to be used as management tools, a comprehensive knowledge of the ecosystems is needed and reserve impacts should be regularly monitored. St. Eustatius Marine Park and two no-take marine reserves were established by the Statian government in 1996 to promote dive tourism and sustainable fisheries. No fisheries study was carried out prior to reserve implementation to determine the status of fish stocks. In the summer of 2008, surveys were undertaken inside and outside the marine reserves to census reef fish and habitat to establish a current baseline and to evaluate the effects of the marine reserves on reef fish populations. The data that was collected was used to answer three questions about the current state of the Marine Park: 1) are there habitat related differences between reserve areas and non-reserve areas or between reef types? 2) do fish density, diversity, or biomass differ between protected and unprotected sites or between reef types? and 3) do habitat characteristics, reserve status, or reef type influence fish density, diversity, and biomass? This study determined that habitat differences among the survey sites affected reef fish populations more than reserve status. However, the no-take reserves may still be important for protecting reef fish populations. The two reserves have been in place for more than 10 years and it is unknown what happened to fish populations during that time. Future research, employing the methods of this study, can be used to monitor reef fish populations and habitat over time to better determine if the reserves are having beneficial effects.
Type
Master's project
Department
Nicholas School of the Environment and Earth Sciences
Subject
Marine Reserve
reef fish
St. Eustatius
underwater visual census
artificial reef
reef habitat
Permalink
https://hdl.handle.net/10161/1013
Citation
McClellan, Katherine (2009). Evaluating the Effectiveness of Marine No-Take Reserves in St. Eustatius, Netherlands Antilles. Master's project, Duke University. Retrieved from https://hdl.handle.net/10161/1013.
Collections
More Info
Show full item record