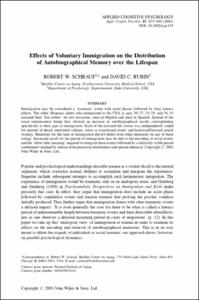 View / Download
99.7 Kb
Date
Authors
Schrauf, RW
Rubin, DC
Repository Usage Stats
167
views
453
downloads
Abstract
Immigration may be considered a 'traumatic' event with acute phases followed by long latency effects. Ten older, Hispanic adults who immigrated to the USA at ages 20-22, 24-28, and 34-35 narrated their 'life-stories' on two occasions, once in English and once in Spanish. Instead of the usual reminiscence bump they showed an increase in autobiographical recalls corresponding specifically to their ages at immigration. Each of the narrated life stories was independently coded for amount of detail, emotional valence, status as transitional event, and backward/forward search strategy. Memories for the time of immigration did not differ from other memories on any of these ratings. Increased recall for the period of immigration may be due to the encoding of novel events and the 'effort after meaning' required to integrate these events followed by a relatively stable period (settlement) marked by release from proactive interference and spaced rehearsal. Copyright © 2001 John Wiley & Sons, Ltd.
Type
Journal article
Permalink
https://hdl.handle.net/10161/10135
Published Version (Please cite this version)
10.1002/acp.835
Publication Info
Schrauf, RW; & Rubin, DC (2001). Effects of Voluntary Immigration on the Distribution of Autobiographical Memory over the Lifespan. Applied Cognitive Psychology, 15(7 SPEC. ISS.). 10.1002/acp.835. Retrieved from https://hdl.handle.net/10161/10135.
This is constructed from limited available data and may be imprecise. To cite this article, please review & use the official citation provided by the journal.
Collections
More Info
Show full item record