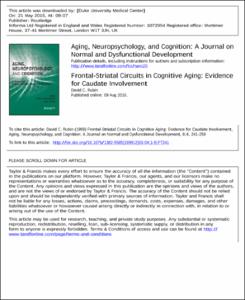 View / Download
150.6 Kb
Date
Author
Rubin, DC
Repository Usage Stats
176
views
268
downloads
Abstract
Changes in cognition with aging have been claimed to be due in large part to a decline in frontal lobe function. However, at our present state of knowledge, the emphasis on the frontal lobes to the exclusion of the rest of the frontal-striatal circuits of which they are a part is unwarranted. To argue this point, I consider another anatomical candidate within these circuits, the caudate. Evidence is presented that the caudate decreases in size with age as much as the frontal lobes and that damage to either the frontal lobes or the caudate is accompanied by declines in inhibitory processes, executive control, and cognitive speed similar to those seen in normal aging. Separating the unique contributions of the frontal lobes and the caudate to these circuits is difficult but should be the focus of future studies of the biological basis of cognitive aging.
Type
Journal article
Permalink
https://hdl.handle.net/10161/10142
Collections
More Info
Show full item record