Bilingual Autobiographical Memory in Older Adult Immigrants: A Test of Cognitive Explanations of the Reminiscence Bump and the Linguistic Encoding of Memories 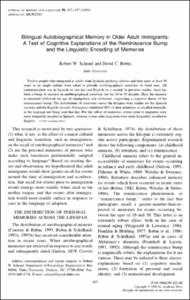 View / Download
134.4 Kb
Date
Authors
Schrauf, RW
Rubin, DC
Repository Usage Stats
229
views
1,025
downloads
Abstract
Twelve people who emigrated as adults from Spanish-speaking cultures and then spent at least 30 years in an Anglo culture were asked to provide autobiographical memories to word cues. All communication was in Spanish on one day and English on a second. In previous studies, there has been a bump or increase in autobiographical memories for the 10 to 30 decades. Here the increase in memories followed the age of immigration and settlement, supporting a cognitive theory of the reminiscence bump. The distributions of memories across the lifespan were similar for the Spanish sessions and the English sessions. Participants identified 20% of their memories as recalled internally in the language not being used that day. For this subset of memories, events prior to migration were more frequently recalled in Spanish, whereas events after migration were more frequently recalled in English. © 1998 Academic Press.
Type
Journal article
Permalink
https://hdl.handle.net/10161/10147
Published Version (Please cite this version)
10.1006/jmla.1998.2585
Publication Info
Schrauf, RW; & Rubin, DC (1998). Bilingual Autobiographical Memory in Older Adult Immigrants: A Test of Cognitive Explanations of the Reminiscence Bump and the Linguistic Encoding of Memories. Journal of Memory and Language, 39(3). pp. 437-457. 10.1006/jmla.1998.2585. Retrieved from https://hdl.handle.net/10161/10147.
This is constructed from limited available data and may be imprecise. To cite this article, please review & use the official citation provided by the journal.
Collections
More Info
Show full item record