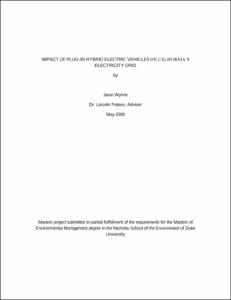 View / Download
1.6 Mb
Date
Author
Wynne, Jason
Advisor
Pratson, Lincoln
Repository Usage Stats
1,179
views
2,214
downloads
Abstract
Several automakers are preparing for the next generation of passenger transportation, Plug-in Hybrid Electric Vehicles (PHEVs). These vehicles are slated to be commercially available starting in 2010. PHEVs operate similar to Hybrid Electric Vehicles (HEVs) which utilize a significant portion of energy from the battery for drive; however PHEV batteries have the capability of recharging through most standard electrical outlets. For these vehicle owners, the demand for gasoline will be offset and replaced by an increased demand in electricity. Using data from the California Independent Systems Operator (CAISO), this report sought to understand how different charging scenarios for PHEVs could impact electricity demand in California. Furthermore, this study aimed to understand how the additional demand from plug-in hybrid vehicles would affect the supply price of generating electricity. The results from this study estimated that PHEVs would require between 2% of California’s summer peak capacity for a low market penetrations and 8% for a high market penetrations of PHEVs. At most, a $5/MWh increase in electricity price can be expected for a 5% market penetration of PHEVs charging under a normal distribution scenario in the evening. Under the same scenario, a 20% market penetration of plug-ins will result in a maximum supply price increase of $20/MWh. Nighttime charging of these vehicles can help level the load curve up to 25% during peak generation days and can decrease the price impact by an average of 30%. Furthermore, the introduction of plug-ins onto CAISO’s grid can increase the amount of electricity needed to meet the minimum load demand, requiring more baseload generation. Under a scenario in which PHEVs are allowed to charge during peak hours, the additional demand can lead to constraints on the existing “peaking units” in California.
Type
Master's project
Department
Nicholas School of the Environment and Earth Sciences
Subject
Plug-in Hybrid Electric Vehicles
Electricity
California
Impacts
Permalink
https://hdl.handle.net/10161/1016
Citation
Wynne, Jason (2009). Impact of Plug-In Hybrid Electric Vehicles on California's Electricity Grid. Master's project, Duke University. Retrieved from https://hdl.handle.net/10161/1016.
Collections
More Info
Show full item record