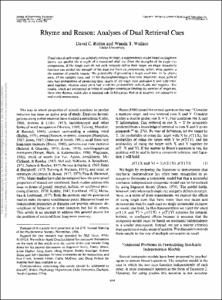 View / Download
1.0 Mb
Date
Authors
Rubin, David C
Wallace, WT
Repository Usage Stats
178
views
265
downloads
Abstract
If and only if each single cue uniquely defines its target, a independence model based on fragment theory can predict the strength of a combined dual cue from the strengths of its single cue components. If the single cues do not each uniquely define their target, no single monotonic function can predict the strength of the dual cue from its components; rather, what matters is the number of possible targets. The probability of generating a target word was .19 for rhyme cues, .14 for category cues, and .97 for rhyme-plus-category dual cues. Moreover, some pairs of cues had probabilities of producing their targets of .03 when used individually and 1.00 when used together, whereas other pairs had moderate probabilities individually and together. The results, which are interpreted in terms of multiple constraints limiting the number of responses, show why rhymes, which play a minimal role in laboratory studies of memory, are common in real-world mnemonics.
Type
Journal article
Permalink
https://hdl.handle.net/10161/10164
Collections
More Info
Show full item record