Durability of antiretroviral therapy and predictors of virologic failure among perinatally HIV-infected children in Tanzania: a four-year follow-up. 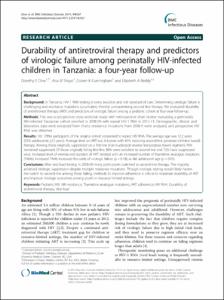 Adjunct Professor in the Department of Pediatrics
Dr. Cunningham is a pediatric infectious diseases physician who has focused her research on the prevention and treatment of HIV infection in children.  She has also played important roles in evaluation of vaccines for other infectious diseases and recently has worked on Ebola virus treatment studies.  She is currently working on studies of active and passive immunization to prevent HIV transmission in neonates born to HIV infected women. Assistant Professor of Pediatrics
Dorothy Dow, MD, MSc is Assistant Professor of Pediatrics and Assistant Research Professor at the Duke Global Health Institute.  Dr. Dow’s research focuses on prevention and treatment of HIV in pediatric populations including prevention of mother-to-child transmission and a focus on adolescent and young adult populations.  Dr. Dow is co-chair of IMPAACT Network Protocol 2016 and a member of the <a href="https://w
Alphabetical list of authors with Scholars@Duke profiles.