PUTTING ON THE GOD MAN: THE ECCLESIASTICAL AND THEOLOGICAL RELATIONSHIP BETWEEN DIDYMUS “THE BLIND” AND ATHANASIUS OF ALEXANDRIA 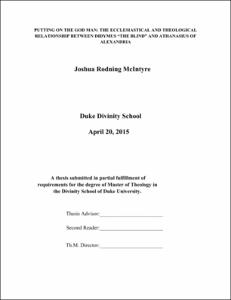 View / Download
535.6 Kb
Date
Author
McIntyre, Joshua Rodning
Advisor
Riedel, Meredith L. D.
Repository Usage Stats
351
views
556
downloads
Abstract
While the contours of history seemingly swept Didymus out of the fourth-century Alexandrian picture, it is apparent that many of his contemporaries saw him as a prominent theologian and bastion of pro-Nicene orthodoxy. An unfortunate by-product of Didymus’ condemnation as an Origenist is that there is not an exhaustive answer to the question of his relationship to Athanasius, the bishop of Alexandria. If more of Didymus’ work were available, then a more accurate picture of the exact relationship between the famous bishop of Alexandria and the blind urban ascetic possibly would emerge. Such information, now lost, could have possibly revealed precisely what Didymus’ alleged role within the ecclesiastical school of Alexandria was and how it related, if at all, to Athanasius’ ecclesial, political, and theological agenda. Yet, thanks to the archaeological discoveries at Tura, one can discern some semblance of the relationship between these two men. Didymus aided Athanasius’ ecclesial, political, and theological agenda by championing a particular strain of pro-Nicene Christian theology in fourth-century Alexandria. Didymus did so as the head of the Alexandrian catechetical school, a position that had evolved over the preceding two centuries because of the encroaching power of the bishops of Alexandria that brought the school under direct ecclesial control. In this position, he both supported the pro-Nicene theology of Athanasius and upheld the bishop’s command to combat certain heretical ascetic groups living within Egypt.
Description
Master of Theology
Type
Master's thesis
Subject
Alexandrian Christianity, Didymus the Blind, Asceticism, Athanasius, deification
Permalink
https://hdl.handle.net/10161/10209
Citation
McIntyre, Joshua Rodning (2015). PUTTING ON THE GOD MAN: THE ECCLESIASTICAL AND THEOLOGICAL RELATIONSHIP BETWEEN DIDYMUS “THE BLIND” AND ATHANASIUS OF ALEXANDRIA. Master's thesis, Duke University. Retrieved from https://hdl.handle.net/10161/10209.
Collections
More Info
Show full item record