Advances in understanding mechanisms of thalamic relays in cognition and behavior. 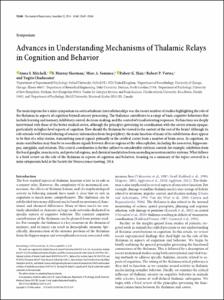