The Relentless, Outside Push: Why the Minnesota Legislature Defied Economics and Public Opinion to Fund Target Field 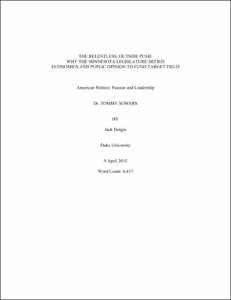 Publicly financed stadium deals have soared to total over 100 instances on more than $30 billion over the past 20 years. Each year the American government spends half as much money on these PPP’s as it does on potential natural disaster relief, three times as much as it does on service member education benefits, and over ten times as much as it does on reading for disadvantaged elementary and secondary school students. The thing is, these deals do not make returns on their investments, at least economically, and as a result public opinion has grown increasingly hostile toward these deals. Secondly, though, stadiums are about more than just economics. They are about sports, entertainment, and civic pride. Legislators balance finances with emotion, personal conviction with broader consensus, and more often than not, they find themselves voting yes for a new ballpark. This paper explores the undercurrents below today’s record-high rate of stadium construction by focusing on Minnesota’s H.F. 2480 bill. After pushing for a decade, the Minnesota Twins landed approval for a new ballpark on May 26, 2006, ultimately putting taxpayers on the hook for 81% of its $555 million capital and hidden costs. These were the same taxpayers, no less, who were strongly against a publicly financed stadiums, according to polls.

The following research, using three hypotheses as guideposts, investigates why the Minnesota legislature agreed to fund Target Field. The first hypothesis revolves around the strength of stadium proponents–both teams and local leaders–in influencing politicians’ stance on a new ballpark. Another explanation suggests that regardless of the strength of outside influence, politicians voted the way they did due to the confines, as well as opportunities, of the formal political structure. Finally, a third consideration is whether specific leaders made unwavering pushes that both kept a stadium debate alive and garnered the necessary supporting votes to win the day.

In determining which had the most significant effect, however, the paper begins with leading theories on the processes–rather than results–that are present in stadium deals across the country, shining a light on numerous urban politics and sports scholars’ work in the Literature Review. The Case and Evidence sections, through the three hypotheses, turn to and analyze the specific events that unfolded leading up H.F. 2480 and the evidence supporting these hypotheses. Finally, the paper concludes that the strength of outside influence–specifically on the part of the Twins organization, the media, businesses, and union allies–was the decisive factor in the approval of Target Field.