Clinical effectiveness of posaconazole versus fluconazole as antifungal prophylaxis in hematology-oncology patients: a retrospective cohort study. 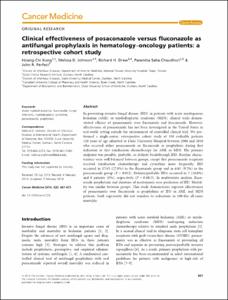 James B. Duke Distinguished Professor of Medicine
Research in my laboratory focuses around several aspects of medical mycology. We are investigating antifungal agents (new and old) in animal models of candida and cryptococcal infections. We have examined clinical correlation of in vitro antifungal susceptibility testing and with in vivo outcome. Our basic science project examines the molecular pathogenesis of cryptococcal infections. We have developed a molecular foundation for C. neoformans, including transformation systems, gene disr
Alphabetical list of authors with Scholars@Duke profiles.