Biogeographic analysis of the woody plants of the Southern Appalachians: Implications for the origins of a regional flora. 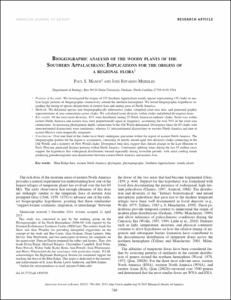 Professor in the Department of Biology
My research emphasizes woody plants, especially the systematics of Fagaceae (the oak family), Juglandaceae (the walnut family), and related wind-pollinated families of flowering plants (Fagales). Our lab uses DNA sequences to generate hypotheses of phylogenetic relationship for inferring morphological character evolution, analyzing patterns of biogeography, and testing species concepts. Students and postdocs have studied the systematics and diversification of the following angiosperm families: A