Denying Difference: Japanese Identity and the Myth of Monoethnic Japan 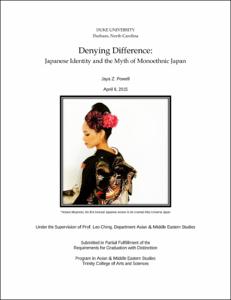 View / Download
1.0 Mb
Date
Author
Powell, Jaya Z.
Repository Usage Stats
900
views
756
downloads
Abstract
In this thesis, I tackle the notion of identity within the very specific sociocultural space of Japan. I critique the conception of Japanese identity as it has emerged in concert with the West through the 19th and 20th centuries. Though there exists a plurality of identities in Japan, there also exists a dominant ideology that selectively denies difference in favor of a monolithic “Japanese” people. Tracing the historical factors leading to its creation, I examine the (naturalized) exclusionary practices that serve to mediate the perception and marginalization of certain bodies within Japan. I bring this problematized “Japanese identity” into the zone of close contact with the experiences of black women in contemporary Japan. Using the methodology of black feminist autoethnography, I explore the ways in which one specific “non-Japanese” body is marked out and not permitted to fully participate in this Japanese space. My own autoethnographic analysis is placed in concert with stories gleaned from other diasporic black women. I choose black women because our stories have a history of invisibility and erasure, and our bodies represent the “extreme Other” with respect to conceptions of Japaneseness. I conclude by returning to the persistent challenge that marks this thesis: the critique of the carefully nurtured ideology of Japan as a homogeneous nation. I argue that Japan has been multiethnic since at least the late 19th century, and that ideas of monolithic Japanese identities were developed in reaction to Western threats, and further that these notions of “Japaneseness” can – and should – be deconstructed. In striving for a more inclusive definition of “Japanese,” we allow for a much larger number of people to coexist within this Japanese sociocultural space in relative harmony.
Type
Honors thesis
Department
Asian and Middle Eastern Studies
Subject
Black feminist autoethnography
identity
Japan
Japanese identity
Japanese society
Nihonjinron
Permalink
https://hdl.handle.net/10161/10247
Citation
Powell, Jaya Z. (2015). Denying Difference: Japanese Identity and the Myth of Monoethnic Japan. Honors thesis, Duke University. Retrieved from https://hdl.handle.net/10161/10247.
Collections
More Info
Show full item record