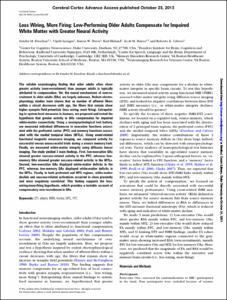 Assistant Professor in Neurology
My research centers around the use of structural and functional imaging measures to study the shifts in network architecture in the aging brain. I am specifically interested in changes in how changes in structural and functional connectivity associated with aging impact the semantic retrieval of word or fact knowledge. Currently this involves asking why older adults have particular difficulty in certain kinds of semantic retrieval, despite the fact that vocabularies and knowledge stores typic
Alphabetical list of authors with Scholars@Duke profiles.