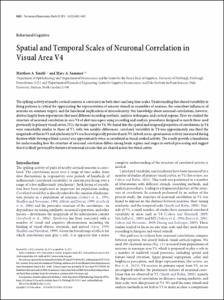 View / Download
1.5 Mb
Date
Authors
Smith, Matthew A
Sommer, Marc A
Repository Usage Stats
121
views
142
downloads
Abstract
The spiking activity of nearby cortical neurons is correlated on both short and long time scales. Understanding this shared variability in firing patterns is critical for appreciating the representation of sensory stimuli in ensembles of neurons, the coincident influences of neurons on common targets, and the functional implications of microcircuitry. Our knowledge about neuronal correlations, however, derives largely from experiments that used different recording methods, analysis techniques, and cortical regions. Here we studied the structure of neuronal correlation in area V4 of alert macaques using recording and analysis procedures designed to match those used previously in primary visual cortex (V1), the major input to V4. We found that the spatial and temporal properties of correlations in V4 were remarkably similar to those of V1, with two notable differences: correlated variability in V4 was approximately one-third the magnitude of that in V1 and synchrony in V4 was less temporally precise than in V1. In both areas, spontaneous activity (measured during fixation while viewing a blank screen) was approximately twice as correlated as visual-evoked activity. The results provide a foundation for understanding how the structure of neuronal correlation differs among brain regions and stages in cortical processing and suggest that it is likely governed by features of neuronal circuits that are shared across the visual cortex.
Type
Journal article
Subject
Action Potentials
Animals
Evoked Potentials, Visual
Fixation, Ocular
Interneurons
Macaca mulatta
Male
Photic Stimulation
Reaction Time
Space Perception
Visual Cortex
Visual Pathways
Permalink
https://hdl.handle.net/10161/10295
Published Version (Please cite this version)
10.1523/JNEUROSCI.4782-12.2013
Publication Info
Smith, Matthew A; & Sommer, Marc A (2013). Spatial and temporal scales of neuronal correlation in visual area V4. J Neurosci, 33(12). pp. 5422-5432. 10.1523/JNEUROSCI.4782-12.2013. Retrieved from https://hdl.handle.net/10161/10295.
This is constructed from limited available data and may be imprecise. To cite this article, please review & use the official citation provided by the journal.
Collections
More Info
Show full item record