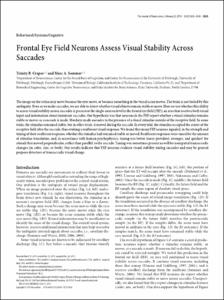 View / Download
2.3 Mb
Date
Authors
Crapse, Trinity B
Sommer, Marc A
Repository Usage Stats
164
views
108
downloads
Abstract
The image on the retina may move because the eyes move, or because something in the visual scene moves. The brain is not fooled by this ambiguity. Even as we make saccades, we are able to detect whether visual objects remain stable or move. Here we test whether this ability to assess visual stability across saccades is present at the single-neuron level in the frontal eye field (FEF), an area that receives both visual input and information about imminent saccades. Our hypothesis was that neurons in the FEF report whether a visual stimulus remains stable or moves as a saccade is made. Monkeys made saccades in the presence of a visual stimulus outside of the receptive field. In some trials, the stimulus remained stable, but in other trials, it moved during the saccade. In every trial, the stimulus occupied the center of the receptive field after the saccade, thus evoking a reafferent visual response. We found that many FEF neurons signaled, in the strength and timing of their reafferent response, whether the stimulus had remained stable or moved. Reafferent responses were tuned for the amount of stimulus translation, and, in accordance with human psychophysics, tuning was better (more prevalent, stronger, and quicker) for stimuli that moved perpendicular, rather than parallel, to the saccade. Tuning was sometimes present as well for nonspatial transaccadic changes (in color, size, or both). Our results indicate that FEF neurons evaluate visual stability during saccades and may be general purpose detectors of transaccadic visual change.
Type
Journal article
Subject
Action Potentials
Analysis of Variance
Animals
Brain Mapping
Female
Fixation, Ocular
Frontal Lobe
Macaca mulatta
Male
Orientation
Photic Stimulation
Psychophysics
Reaction Time
Saccades
Sensory Receptor Cells
Visual Fields
Permalink
https://hdl.handle.net/10161/10299
Published Version (Please cite this version)
10.1523/JNEUROSCI.1320-11.2012
Publication Info
Crapse, Trinity B; & Sommer, Marc A (2012). Frontal eye field neurons assess visual stability across saccades. J Neurosci, 32(8). pp. 2835-2845. 10.1523/JNEUROSCI.1320-11.2012. Retrieved from https://hdl.handle.net/10161/10299.
This is constructed from limited available data and may be imprecise. To cite this article, please review & use the official citation provided by the journal.
Collections
More Info
Show full item record