Role of T cells in malnutrition and obesity. 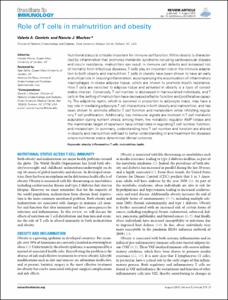 View / Download
802.1 Kb
Date
Authors
Gerriets, Valerie A
MacIver, Nancie J
Repository Usage Stats
179
views
468
downloads
Abstract
Nutritional status is critically important for immune cell function. While obesity is characterized by inflammation that promotes metabolic syndrome including cardiovascular disease and insulin resistance, malnutrition can result in immune cell defects and increased risk of mortality from infectious diseases. T cells play an important role in the immune adaptation to both obesity and malnutrition. T cells in obesity have been shown to have an early and critical role in inducing inflammation, accompanying the accumulation of inflammatory macrophages in obese adipose tissue, which are known to promote insulin resistance. How T cells are recruited to adipose tissue and activated in obesity is a topic of considerable interest. Conversely, T cell number is decreased in malnourished individuals, and T cells in the setting of malnutrition have decreased effector function and proliferative capacity. The adipokine leptin, which is secreted in proportion to adipocyte mass, may have a key role in mediating adipocyte-T cell interactions in both obesity and malnutrition, and has been shown to promote effector T cell function and metabolism while inhibiting regulatory T cell proliferation. Additionally, key molecular signals are involved in T cell metabolic adaptation during nutrient stress; among them, the metabolic regulator AMP kinase and the mammalian target of rapamycin have critical roles in regulating T cell number, function, and metabolism. In summary, understanding how T cell number and function are altered in obesity and malnutrition will lead to better understanding of and treatment for diseases where nutritional status determines clinical outcome.
Type
Journal article
Subject
T cells
inflammation
leptin
malnutrition
obesity
Permalink
https://hdl.handle.net/10161/10312
Published Version (Please cite this version)
10.3389/fimmu.2014.00379
Publication Info
Gerriets, Valerie A; & MacIver, Nancie J (2014). Role of T cells in malnutrition and obesity. Front Immunol, 5. pp. 379. 10.3389/fimmu.2014.00379. Retrieved from https://hdl.handle.net/10161/10312.
This is constructed from limited available data and may be imprecise. To cite this article, please review & use the official citation provided by the journal.
Collections
More Info
Show full item record Adjunct Associate Professor in the Department of Pediatrics
My laboratory is broadly interested in how large changes in nutritional status (e.g. malnutrition or obesity) influence T cell immunity.  Malnutrition can lead to immunodeficiency and increased risk of infection, whereas obesity is associated with inflammation that promotes multiple diseases including autoimmunity, type 2 diabetes, and cardiovascular disease.  We have identified the adipocyte-secreted hormone leptin as a critical link between nutrition and immunity.  Leptin is