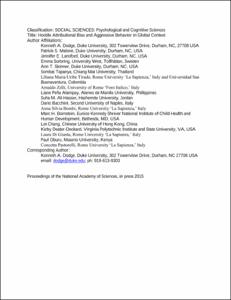 Research Scientist, Senior
Patrick Malone is a senior research scientist with the Center. His specialization is quantitative psychology and his independent research program focuses on developing statistical models of change over time, especially in health behaviors and developmental psychopathology. He is particularly interested in novel approaches to understanding racial, ethnic, and cultural differences in adolescent substance use and other health risk behaviors. As a methodological specialist, Dr. Malone col Research Scientist
Ann Skinner joined the Center in 2001 and is the research project manager for Parenting Across Cultures (PAC). Her research focuses on the ways in which stressful community, familial, and interpersonal events impact parent-child relationships and the development of aggression and internalizing behaviors in youth. She has extensive experience in data management of multisite projects and in supervising teams for
Alphabetical list of authors with Scholars@Duke profiles.