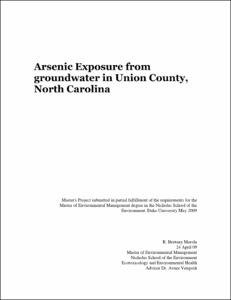 View / Download
3.1 Mb
Date
Author
Merola, R. Brittany
Advisor
Vengosh, Avner
Repository Usage Stats
578
views
1,672
downloads
Abstract
Arsenic contamination of groundwater is a global problem affecting human health. The highest concentrations occur overseas in areas such as Bangladesh, India, Vietnam, and Thailand. The United States is not immune and also has hotspots of arsenic in dangerously high concentrations. The focus of this project was to evaluate the extent and concentration of arsenic in one such area, Union County, North Carolina, and to attempt to use arsenic in toenails as a biomarker of exposure. Arsenic concentration above the EPA’s maximum contaminant level (MCL) of 10ppb was found in 22 out of 64 households tested (34%). The measurement of arsenic in toenails was successfully used as a biomarker of exposure. Data showed that men had a greater sensitivity to arsenic and their nail data had better correlation. Children also showed a greater sensitivity. Out of 69 participants in the toenail-biomarker study, 4 had arsenic concentrations in their toenails above a level deemed safe. Based on these results it is evident that arsenic contamination of drinking water in Union County is an issue of concern.
Type
Master's project
Department
Nicholas School of the Environment and Earth Sciences
Subject
Arsenic
Groundwater contamination
Biomarker of eposure
Toenail
Drinking water
Water quality
Permalink
https://hdl.handle.net/10161/1033
Citation
Merola, R. Brittany (2009). Arsenic exposure from groundwater in Union County, North Carolina. Master's project, Duke University. Retrieved from https://hdl.handle.net/10161/1033.
Collections
More Info
Show full item record