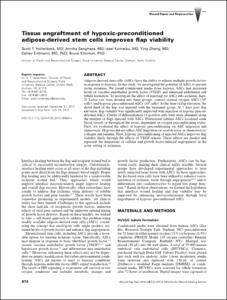 Instructor in the Department of Surgery Associate Professor of Surgery
Breast Cancer, Adipose Biology, Lower Extremity Reconstruction
This author no longer has a Scholars@Duke profile, so the information shown here reflects their Duke status at the time this item was deposited. Associate Professor Emeritus in Surgery
Our overriding interests are in the fields of tissue engineering, wound healing, biosensors, and long term improvement of medical device implantation. My basic research interests are in the area of physiological mechanisms of optimizing substrate transport to tissue. This broad topic covers studies on a whole animal, whole organ, hemorheological, microvascular, cellular, ultrastructural, and molecular level. The current projects include: 1) control of blood flow and flow distribu
Alphabetical list of authors with Scholars@Duke profiles.