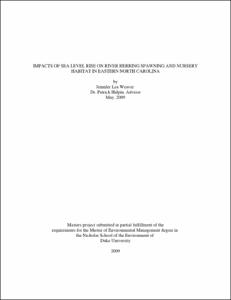 View / Download
752.2 Kb
Date
Author
Weaver, Jennifer
Advisor
Halpin, Pat
Repository Usage Stats
331
views
770
downloads
Abstract
River herring populations have declined in abundance by 99% since the 1970s, in part because of spawning and nursery habitat loss. In Eastern North Carolina, river herring spawn in coastal streams and adjacent riparian wetlands. Juveniles remain in natal streams and adjacent estuaries until the fall, when they migrate to oceanic environments. Many of these habitats are low-lying and may be subject to increasing water levels as the sea level rises in response to climate change. This project evaluates the extent of these effects to currently identified habitat and presents a model to describe future impacts to river herring habitat in these regions as water level rises and wetlands migrate inland. Sea level rise was modeled at increments of 0.25, 0.5, 0.75, 1, 1.5 and 2 meters for the Salmon Creek watershed in the Chowan River Basin. Resulting sea levels were overlaid with a GIS-based model of current river herring habitat. Future habitat quality was predicted through the application of a simple habitat model and the development of an index that evaluates the potential for riparian wetland migration. Results indicate that sea level rise has the potential to affect a significant portion of available habitat in the study area. Increases in water level are likely to result in the initial creation of habitat in the lower portion of Salmon Creek watershed; however, the suitability of these habitats for river herring spawning and juvenile development will decrease as sea level rise proceeds. Information generated using this model identifies the extent of future spawning and nursery habitat for river herring and can be used to prioritize areas important for conservation of river herring habitat in the future.
Type
Master's project
Department
Nicholas School of the Environment and Earth Sciences
Subject
river herring
sea level rise
Chowan River
Permalink
https://hdl.handle.net/10161/1035
Citation
Weaver, Jennifer (2009). IMPACTS OF SEA LEVEL RISE ON RIVER HERRING SPAWNING AND NURSERY HABITAT IN EASTERN NORTH CAROLINA. Master's project, Duke University. Retrieved from https://hdl.handle.net/10161/1035.
Collections
More Info
Show full item record