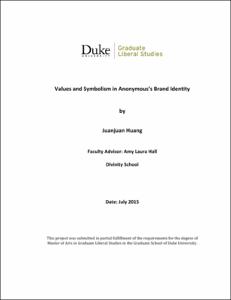 View / Download
1.2 Mb
Date
Author
Huang, Juanjuan
Advisor
Hall, Amy Laura
Repository Usage Stats
704
views
1,277
downloads
Abstract
Hacktivism is a portmanteau of computer hacking and activism (Wikipedia). Coined in 1996 by Omega, a member of cDc, “hacktivism” was linked to Article 19 of the United Nations Declaration of Human Rights (UNDHR), stating “everyone has the right to freedom of opinion and expression” (Shantz and Tomblin 63-64). Among all the hacker collectives that associate themselves with hacktivism, Anonymous, a leaderless and decentralized group of hackers, might be regarded as the most controversial one. This is because it dabbles in a series of whimsical pranks and publicity stunts but also deliberate digital attacks against government, religious, and corporate websites in the name of defending free flow of information and delivering social justice. In this paper, I will use public media content regarding Anonymous for my primary sources, including Western mainstream media’s news coverage and Anonymous’s own social media posts, to analyze the contribution Anonymous has made to the hacker subculture. Anonymous commits itself to building a distinguishable brand identity as a defender of freedom of speech, hoping to use its symbolic values to “[contribute] to a wider political landscape” (Goode 84). Anonymous’s absence of hierarchy allows anyone who shares the same principles to partake in online/offline activities and claim its title. Its slogans take on the coloration of populism, denying self-promotion, demanding greater digital democracy and serving as an antidote to “cyber-imperialism” (Coleman 391). Plus, Anonymous excels at using social media to promulgate its values and create counter-narratives. Although, more often than not, Anonymous adopts legally ambiguous and morally debatable tactics to hack and expose “wrongdoers,” this leaderless and decentralized hacker collective has become an unorthodox political and cultural icon of civil resistance.
Type
Master's thesis
Department
Graduate Liberal Studies
Subject
Anonymous, hacktivism, brand identity, decentralization, yellow hats, DDoS
Permalink
https://hdl.handle.net/10161/10356
Citation
Huang, Juanjuan (2015). Values and Symbolism in Anonymous's Brand Identity. Master's thesis, Duke University. Retrieved from https://hdl.handle.net/10161/10356.
Collections
More Info
Show full item record