Folk Fiction: Yiddish and the Negotiation of Literary Legacy in Germany after 1945 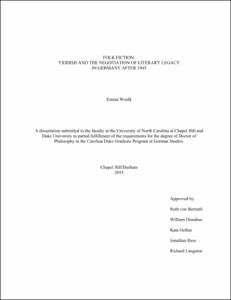 Files
Dissertation file
1004.5 Kb
dukespace_license_template.docx
13.9 Kb
Date
Author
Woelk, Emma
Advisor
von Bernuth, Ruth
Repository Usage Stats
235
views
351
downloads
Abstract
Following the Holocaust, when Eastern European Yiddish-language culture was all but destroyed and millions of Yiddish speakers were murdered, the language took on newsignificance in German culture. Whether it be as a symbol of proletarian solidarity in East German theater or as part of West German literary engagement with American Jewish culture, Yiddish shows up all over postwar German literature and performance. Building on scholarship from German Studies, Yiddish Studies, and cultural and political history, the following study connects the study of Yiddish in German literature after 1945 both to discourses from the early 20th century and to broader discussions on German identity and literary legacy in the postwar era. I am primarily interested in the reinvention of the folk tradition following the Nazi era and the creation of a usable literary past at a time in which the German political and geographic present was in flux. This dissertation explores these issues by looking at the ways in which German-language authors on both sides of the Berlin Wall, and those writing after its fall, relied on Yiddish to negotiate national literary identities. By looking at the diverse body of texts that do this and the ways in which these works were received, this dissertation demonstrates that the presence of Yiddish language and culture in German literature after 1945 was used to create spaces in which foundational narratives could be reshaped and new identities defined.
Type
Dissertation
Permalink
https://hdl.handle.net/10161/10358
Citation
Woelk, Emma (2015). Folk Fiction: Yiddish and the Negotiation of Literary Legacy in Germany after 1945. Dissertation, Duke University. Retrieved from https://hdl.handle.net/10161/10358.
Collections
More Info
Show full item record