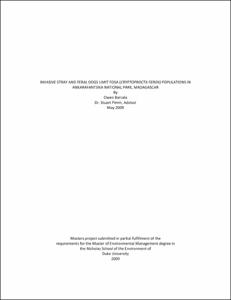 View / Download
144.1 Kb
Date
Author
Barcala, Owen
Advisor
Pimm, Stuart
Repository Usage Stats
647
views
1,984
downloads
Abstract
The fosa (Cryptoprocta ferox) is a medium sized carnivore of the family Eupleridae which is endemic to the island of Madagascar. Recent publications have shown that the fosa is under significant pressure from deforestation and fragmentation, leading to its classification as Threatened under the Endangered Species Act. A trap study was conducted from 1999 to 2008 in Ankarafantsika National Park, Madagascar, to ascertain the health of a population and measure additional threats to its survival. Feral dogs (Canis lupus familiaris) appeared in the park in 2004 and a comparison of trap rates of the two species shows an inverse relationship between the presence of dogs and the presence of fosa. In this paper I discuss reasons for this relationship, the effect of the continued presence of dogs, and implications for the management of the park.
Type
Master's project
Department
Nicholas School of the Environment and Earth Sciences
Subject
fosa
feral dogs
ankarafantsika
carnivore management
cryptoprocta ferox
competition with domesticated animals
Permalink
https://hdl.handle.net/10161/1037
Citation
Barcala, Owen (2009). Invasive Stray and Feral Dogs Limit Fosa (Cryptoprocta ferox) Populations in Ankarafantsika National Park, Madagascar. Master's project, Duke University. Retrieved from https://hdl.handle.net/10161/1037.
Collections
More Info
Show full item record