States of Ghetto, Ghettos of States: Haiti and the ‘Era de Francia’ in the Dominican Republic, 1804-1808 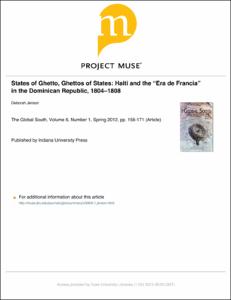 Professor of Romance Studies
A scholar of "long 19th century" French and Caribbean literature and culture, I also work in the fields of cognitive literary studies and health humanities. Monographs, edited volumes, editions, and translations include: Beyond the Slave Narrative: Politics, Sex, and Manuscripts in the Haitian Revolution; Trauma and Its Representations: The Social Life of Mimesis in Post-Revolutionary France; Poetry of Haitian Independence (with D. Kadish and N. Shapiro); Unconscious Dominions: