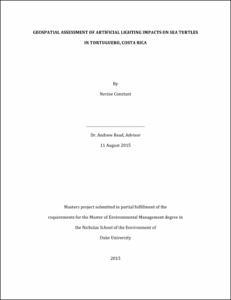 Green turtles (Chelonia mydas) are classified as endangered globally by the International Union for Conservation of Nature (IUCN). Tortuguero Beach in Costa Rica supports the largest green turtle nesting population in the Western Hemisphere, with more than one hundred thousand green turtle nests laid on the beach every year. The Sea Turtle Conservancy (STC) has monitored and worked to protect the nesting population since 1959, and since 2004, the organization has conducted surveys to monitor artificial lighting on the beach. The primary objective of this project was to support the Sea Turtle Conservancy’s efforts by: <ol><li>1) Assessing the effect of artificial lighting from adjacent development on green turtle nesting in Tortuguero,</li> <li>2) Mapping artificial lighting on the beach in order to identify the brightest areas as appropriate targets for light pollution reduction efforts, and</li> <li>3) Developing a geographic information system (GIS) database to facilitate future monitoring and beach protection by STC.</li></ol>

Between June and August 2014, I conducted walking surveys to map the nesting beach and light sources using a Trimble Juno SB GPS unit, and I developed a GIS database that formed the basis for subsequent analyses and data visualization. I built STC’s monitoring data from 2004 through 2014 into a polygon layer of the beach subdivided into mile sections defined by mile markers erected by STC. During the new moon in June and July 2014, I conducted brightness surveys in concert with STC’s light surveys and measured brightness in units of luminance at 50-meter intervals along the beach using a Unihedron Sky Quality Meter. Using spatial data of the beach and light sources, luminance data from brightness assessments, and monitoring data from STC, I determined a mean luminance value for each mile section, examined the relationship between luminance and nesting activity, and mapped light pollution on the beach.

These results were consistent with the findings of previous studies conducted on sea turtle nesting beaches and support the need for a turtle-friendly lighting initiative in Tortuguero. Successful management of light pollution on Tortuguero Beach will require a coordinated effort between the Sea Turtle Conservancy, the Costa Rican Electricity Institute (ICE), and local stakeholders. I made the following recommendations for addressing light pollution in Tortuguero: <ol><li>1) Light pollution management efforts should focus on Tortuguero Village, where the majority of light sources are found and luminance was highest.</li> <li>2) Light pollution management should involve both restoration of native beachfront vegetation and improvements in lighting technology.</li> <li>3) Future brightness surveys to document reduction of light pollution in response to STC’s efforts could focus on mile sections adjacent to Tortuguero Village. Brightness data from this study provide a baseline against which to compare future brightness levels on the beach.</li> <li>4) Targeted monitoring of hatchling disorientation near Tortuguero Village would provide additional insight into artificial lighting impacts on the nesting population and help identify specific lights that continue to be problematic after management actions are taken.</li></ol>