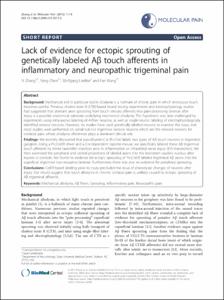 Morris N. Broad Distinguished Professor
My lab studies neural circuit basis of sensory perception. Specifically we are interested in determining neural circuits underlying (1) active touch sensation including tactile processing stream and motor control of touch sensors on the face; (2) pain sensation including both sensory-discriminative and affective aspects of pain; and (3) general anesthesia including the active pain-suppression process. We use a combination of genetic, viral, electrophysiology, and in vivo imaging (in f
Alphabetical list of authors with Scholars@Duke profiles.