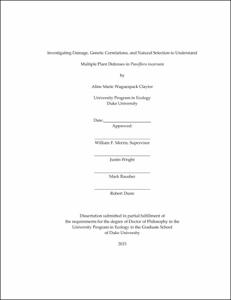 Plants commonly produce multiple, seemingly redundant defenses, but the reasons for this are poorly understood. The specificity of defenses to particular herbivores could drive investment in multiple defenses. Alternatively, genetic correlations between defenses could lead to their joint expression, even if possessing both defenses is non-adaptive. Plants may produce multiple defenses if putative resistance traits do not reduce damage, forcing plants to rely on tolerance of damage instead. Furthermore, resource shortages caused by herbivore damage could lead to compensatory changes in expression and selection on non-defense traits, such as floral traits. Natural selection could favor producing multiple defenses if synergism between defenses increases the benefits or decrease the costs of producing multiple defenses. Non-linear relationships between the costs and benefits of defense trait investment could also favor multiple defenses.

Passiflora incarnata (`maypop') is a perennial vine native to the southeast United States that produces both direct, physical traits (leaf toughness and trichomes) and rewards thought to function in indirect defense (extrafloral nectar in a defense mutualism with ants), along with tolerance of herbivore damage. I performed two year-long common garden experiments with clonal replicates of plants originating from two populations. I measured plant fitness, herbivore damage, and defense traits. I ran a genotypic selection analysis to determine if manipulating herbivore damage through a pesticide exclusion treatment presence mediated selection on floral traits, and if herbivore damage led to plastic changes in floral trait expression. To evaluate the role of selection in maintaining multiple defenses, I estimated fitness surfaces for pairwise combinations of defense traits and evaluated where the fitness optima were on each surface.

I found that resistance traits did not reduce herbivore damage, but plants demonstrated specific tolerance to different classes of herbivore damage. Tolerance was negatively correlated with resistance, raising the possibility that tolerance of herbivore damage instead of resistance may be the key defense in this plant, and that production of the two type of defense is constrained by underlying genetic architecture. Plants with higher levels of generalist beetle damage flowered earlier and produced proportionally more male flowers. I found linear selection for both earlier flowering and a lower proportion of male flowers in the herbivore exclusion treatment. I found that selection favored investment in multiple resistance traits. However, for two tolerance traits or one resistance and one tolerance trait, investment in only one trait was favored.

These results highlight the possibility of several mechanisms selecting for the expression of multiple traits, including non-defense traits. Resistance traits may have a non-defensive primary function in this plant, and tolerance may instead be a key defense strategy. These results also emphasize the need to consider the type of trait--resistance or tolerance--when making broad predictions about their joint expression.