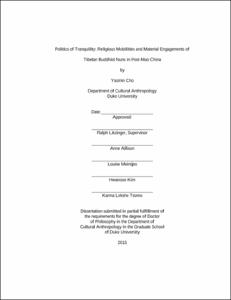 This dissertation ethnographically examines the lives of Tibetan Buddhist nuns in Yachen, a mega-sized Tibetan Buddhist encampment in eastern Tibet that emerged in the 1980s and is now a leading center of Tibetan Buddhist revivalism in post-Mao China. Over 10,000 nuns make up the vast majority of the permanent residents in this community (approximately 2,000 monks live there as well), but few scholarly discussions have taken place regarding the lives and practices of the nuns in Yachen or in Tibetan Buddhist revivals in China in general. This dissertation, therefore, calls attention first to the lack of proper research on these nuns by providing ethnographic accounts of their everyday lives in “China’s Tibet.” By placing the nuns and their lives at the center of discussion, I was able to realize the significance of examining the material, sensory, and mobile events and occasions through which alternative political logics and possibilities appear in the practice of Buddhism and in Sino-Tibetan politics. This alternative politics—which I call the politics of tranquility—presents itself through the mobilities and material engagements of the nuns in Yachen, and offers a stark contrast to the existing dichotomous understanding of Sino-Tibet relationships. Therefore, second, I argue that mobilities, as well as material and sensory engagements, are essential to the practice of Buddhism and the lives of the nuns in Yachen, without whom the current Buddhist revivalism, in Yachen at least, would not be possible.

Following my Introduction (Chapter 1), I begin my chapters by presenting the distinctive mobilities of the nuns. Most of the nuns whom I have known in Yachen are escapees, running away from their homes to become nuns in this remote region; their mobilities, against all odds—both physical and social—are what initially make Yachen possible (Chapter 2). Upon arrival, in the face of the harsh spatial regulations imposed by the Chinese state, they engage in building residential huts for themselves; these building activities are primarily responsible for Yachen’s accelerated expansion and thus for its potential political tension (Chapter 3). In Chapters 2 and 3, I also argue that the nuns’ mobilities and building practices, which have rarely been taken seriously within the Buddhist revival in China, in fact constitute the fundamental process of making Yachen, i.e., of making the sacred. In addition, by living with the nuns, I was able to observe their intimacies and secrets through the lens of their transgression and confession. I consider the act of transgression as one of the most political ways to give an account of the self as Buddhist practitioner, as nun, and as woman (Chapter 4). I argue that the nuns actively, provocatively, and riskily (re)shape Yachen’s norms and morality through their acts of transgression and confession. Finally, by drawing on food consumption and eating habits among the nuns in Yachen, I tackle the highly intertwined issues of ethnicity, money, religion, and ethics in Buddhist revivalism as well as in Sino-Tibetan relations (Chapter 5).