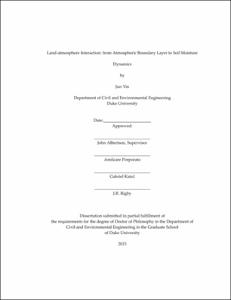 Accurate modeling of land-atmosphere interaction would help us understand the persistent weather conditions and further contribute to the skill of seasonal climate prediction. In this study, seasonal variations in radiation and precipitation forcing are included in a stochastic soil water balance model to explore the seasonal evolution of soil moisture probabilistic structure. The theoretical results show soil moisture tends to exhibit bimodal behavior only in summer when there are strong positive feedback from soil moisture to subsequent rainfall. Besides the statistical analysis of soil moisture – rainfall feedback, simplified mixed-layer models, coupled with soil-plant-atmosphere continuum, are also used to study heat flux partitioning, cloud initiation, and strength of moist convection. Approximate analytical solutions to the mixed-layer model are derived by applying Penman-Monteith approach, which help explain the roles of equilibrium evaporation and vapor pressure deficit in controlling the diurnal evolution of boundary layer. Results from mixed-layer model also define four regimes for possible convection in terms of cloud/no-cloud formation and low/high convection intensity. Finally, cloud-topped mixed-layer model is developed to simulate the boundary-layer dynamics after the cloud formation, when the evaporative and radiative cooling other than surface heat flux may significantly contribute to the growth of the boundary layer.