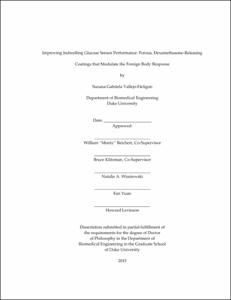 Inflammation and the formation of an avascular fibrous capsule have been identified as the key factors controlling the wound healing associated failure of implantable glucose sensors. Our aim is to guide advantageous tissue remodeling around implanted sensor leads by the temporal release of dexamethasone (Dex), a potent anti-inflammatory agent, in combination with the presentation of a stable textured surface.

The tissue modifying effects of Dex-releasing porous coatings were accessed by fully implanting Tygon® tubing in the subcutaneous space of healthy and diabetic rats. Based on encouraging results from these studies, we deployed Dex-releasing porous coatings from the tips of functional sensors in both diabetic and healthy rats. We evaluated if the tissue modifying effects translated into accurate, maintainable and reliable sensor signals in the long-term. Sensor functionality was accessed by continuously monitoring glucose levels and performing acute glucose challenges at specified time points.

Sensors treated with porous Dex-releasing coatings showed diminished inflammation and enhanced vascularization of the tissue surrounding the implants in healthy rats. Functional sensors with Dex-releasing porous coatings showed enhanced sensor sensitivity over a 21-day period when compared to controls. Enhanced sensor sensitivity was accompanied with an increase in sensor signal lag and MARD score. These results indicated that Dex-loaded porous coatings were able to elicit a favorable tissue response, and that such tissue microenvironment could be conducive towards extending the performance window of glucose sensors in vivo.

The diabetic pilot animal study showed differences in wound healing patters between healthy and diabetic subjects. Diabetic rats showed lower levels of inflammation and vascularization of the tissue surrounding implants when compared to their healthy counterparts. Also, functional sensors treated with Dex-releasing porous coatings did not show enhanced sensor sensitivity over a 21-day period. Moreover, increased in sensor signal lag and MARD scores were present in porous coated sensors regardless of Dex-loading when compared to bare implants. These results suggest that the altered wound healing patterns presented in diabetic tissues may lead to premature sensor failure when compared to sensors implanted in healthy rats.