DukeEngage and the Politics of "Help": Millennials, Civic Engagement, and the Problem of "Saving the World" 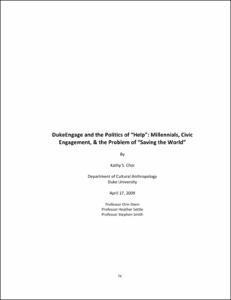 View / Download
643.5 Kb
Date
Author
Choi, Kathy
Repository Usage Stats
580
views
737
downloads
Abstract
The summer of 2008 signaled the inauguration of DukeEngage, the highly anticipated civic engagement program for undergraduates at Duke University. DukeEngage provides funding for undergraduates who wish to pursue an intensive civic engagement project for 8-weeks in the summer, and the program’s kickoff transplanted 365 enthusiastic Duke students into virtually every corner of the globe for an immersive service experience. The proliferation of programs such as DukeEngage is just one example of a wider, more recent trend that expands not only to peer academic institutions but throughout greater society. Philanthropies, public policy institutions, humanitarian groups, non-profit organizations, politicians, teachers, even businessmen and idealists alike have adopted the mantra of “doing good”, and have reorganized their mission and vision statements accordingly – perhaps without much consideration of the idea’s complex teology and ultimate consequences. The idea of “Saving the World” is a loaded concept that cannot be separated from the complicated and profound ways in which it has been co-opted, transformed, and redefined for each new generation. In this project I hope to explore the complex ways in which Duke students - as Millennial participants in DukeEngage - imagine and live out their beliefs in the value civic engagement and buy into the compelling notion of “Saving the World”. Why is civic engagement viewed as an agent of change? From where do the assumptions of intervention as “good” emerge? What motivates these Millennial do-gooders? Ultimately, I hope to better understand how participation in DukeEngage, as well as the program itself, is a generationally specific moment that presents its fair share of problems and contradictions – as well as new possibilities. It is my hope that a better understanding of this moment will translate into the “bigger picture” – how will Millennials envision their role in greater society, and what is their relation to ideas of democracy? What will this mean for the future of the United States? Will the world with DukeEngage be a better world than one without?
Type
Honors thesis
Department
Cultural Anthropology
Subject
DukeEngage
Millennials
Help
Civic engagement
Permalink
https://hdl.handle.net/10161/1048
Citation
Choi, Kathy (2009). DukeEngage and the Politics of "Help": Millennials, Civic Engagement, and the Problem of "Saving the World". Honors thesis, Duke University. Retrieved from https://hdl.handle.net/10161/1048.
Collections
More Info
Show full item record