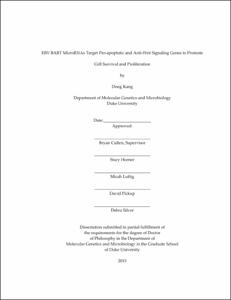 Epstein-Barr virus (EBV) is a ubiquitous human gamma-herpesvirus which chronically infects >95% of the global population, and can give rise to a number of malignancies in B cells and epithelial cells. In EBV latently infected epithelial cells, such as nasopharyngeal carcinoma (NPC) and gastric carcinoma (GaCa) cells, viral protein expression is low. In contrast, a cluster of viral microRNAs (miRNAs) called miR-BARTs is highly expressed. MiRNAs are small non-coding RNAs which regulate gene expression by binding to complementary sequences in mRNAs. It is likely that miR-BARTs play a crucial role in EBV-infected epithelial cells, however a comprehensive understanding of miR-BARTs is currently lacking. Here, I present two studies utilizing the phenotypic and the target approaches, respectively, to demonstrate that miR-BARTs can inhibit apoptosis and activate the Wnt signaling pathway. To discover miR-BARTs that can inhibit apoptosis, I individually expressed miR-BARTs in the EBV- GaCa cell line AGS, and identified five miR-BARTs that conferred this phenotype. To identify pro-apoptotic genes targeted by the five anti-apoptotic miRNAs, I validated one previously published target and identified nine novel targets by performing photoactivatable ribonucleoside-enhanced crosslinking and immunoprecipitation (PAR-CLIP) in the EBV+ NPC cell line C666. Next, I thoroughly demonstrated that the 10 candidate target genes were substantially suppressed by expression of the relevant miR-BARTs, as measured by 3’UTR-containing firefly luciferase (FLuc) expression, mRNA and protein levels, and knockdown of seven of the 10 candidate genes could suppress apoptosis, mimicking the effects of relevant miR-BARTs. On the other hand, in order to identify miR-BARTs that can activate the Wnt signaling pathway, I analyzed the PAR-CLIP data set of C666 cells and discovered nine anti-Wnt signaling targets of miR-BARTs, including seven novel genes and two pro-apoptotic genes identified above. Using FLuc 3’UTR indicator assays, I proved that the 3’UTRs of all seven newly identified anti-Wnt signaling genes were indeed targeted by the relevant miR-BARTs identified by PAR-CLIP. Utilizing a Wnt signaling FLuc reporter TOPflash which measures the Wnt signaling activation, I confirmed that expression of many miR-BARTs that target Wnt signaling inhibitors can indeed upregulate the Wnt signaling pathway. Together, my results identified and validated a substantial number of novel targets of miR-BARTs involved in apoptosis and the Wnt signaling pathway, indicating that EBV may employ miR-BARTs to heavily target these two pathways to facilitate chronic infection.