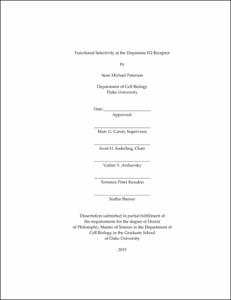 The neuromodulator dopamine signals through the dopamine D2 receptor (D2R) to modulate central nervous system functions through diverse signal transduction pathways. D2R is a prominent target for drug treatments in disorders where dopamine function is aberrant, such as schizophrenia. D2R signals through distinct G protein and β-arrestin pathways and drugs that are functionally selective for these pathways could have improved therapeutic potential. How D2R signals through the two pathways is still not well defined, and efforts to elucidate these pathways have been hampered by the lack of adequate tools for assessing the contribution of each pathway independently. To address this, Evolutionary Trace was used to produce D2R mutants with strongly biased interactions for either G protein or β-arrestin. Additionally, various permutations of these mutants were used to identify critical determinants of D2R functional selectivity. D2R interactions with the two major downstream signal transducers were effectively dissociated and G protein signaling accounts for D2R canonical MAP kinase signaling cascade activation. Nevertheless, when expressed in mice, the β-arrestin biased D2R caused a significant potentiation of amphetamine-induced locomotion, while the G protein biased D2R had minimal effects. The mutant receptors generated here provide a new molecular tool set that enable a better definition of the individual roles of G protein and β-arrestin signaling in D2R pharmacology, neurobiology and associated pathologies.