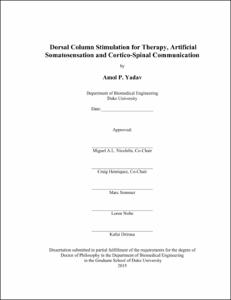 The spinal cord is an information highway continuously transmitting afferent and efferent signals to and from the brain. Although spinal cord stimulation has been used for the treatment of chronic pain for decades, its potential has not been fully explored. Spinal cord stimulation has never been used with the aim to transmit relevant information to the brain. Although, various locations along the sensory pathway have been explored for generating electrical stimulation induced sensory percepts, right from peripheral nerves, to thalamus to primary somatosensory cortex, the role of spinal cord has been largely neglected. In this dissertation, I have attempted to investigate if, electrical stimulation of dorsal columns of spinal cord called as Dorsal Column Stimulation (DCS) can be used as an effective technique to communicate therapeutic and somatosensory information to the brain.

To study the long term effects of DCS, I employed the 6-hydroxydopamine (6-OHDA) rodent model of Parkinson’s Disease (PD). Twice a week DCS for 30 minutes resulted in a dramatic recovery of weight and behavioral symptoms in rats treated with striatal infusions of 6-OHDA. The improvement in motor symptoms was accompanied by higher dopaminergic innervation in the striatum and increased cell count of dopaminergic neurons in the substantia nigra pars compacta (SNc). These results suggest that DCS has a chronic therapeutic and neuroprotective effect, increasing its potential as a new clinical option for treating PD patients. Thus, I was able to demonstrate the long-term efficacy of DCS, as a technique for therapeutic intervention.

Subsequently, I investigated if DCS can be used as a technique to transmit artificial somatosensory information to the cortex and trained rats to discriminate multiple artificial tactile sensations. Rats were able to successfully differentiate 4 different tactile percepts generated by varying temporal patterns of DCS. As the rats learnt the task, significant changes in the encoding of this artificial information were observed in multiple brain areas. Finally, I created a Brainet that interconnected two rats: an encoder and a decoder, whereby, cortical signals from the encoder rat were processed by a neural decoder while it performed a tactile discrimination task and transmitted to the spinal cord of the decoder using DCS. My study demonstrated for the first time, a cortico-spinal communication between different organisms.

My obtained results suggest that DCS, a semi-invasive technique, can be used in the future to send prosthetic somatosensory information to the brain or to enable a healthy brain to directly modulate neural activity in the nervous system of a patient, facilitating plasticity mechanism needed for efficient recovery.