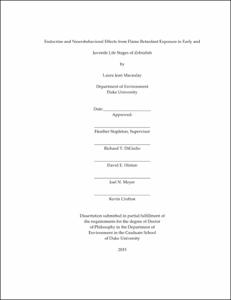 Polybrominated diphenyl ethers (PBDEs) are a class of flame retardant chemicals that were added to furniture foam, electronics, plastics, and some textiles to reduce their flammability. While PBDEs have been phased out from use in current products, huge reservoirs of products containing PBDEs still exist. It is likely exposure to PBDEs will continue as older products are discarded and recycled. PBDEs are ubiquitous contaminants in indoor and outdoor environments due to their widespread use in many products and their ability to migrate out of treated materials.

Major health effect concerns from PBDE exposure identified in laboratory studies include neurotoxicity, reproductive/developmental toxicity, and thyroid disruption. Importantly, mammals metabolize PBDEs into the hydroxylated polybrominated diphenyl ethers (OH-BDEs), which are structurally similar to endogenous thyroid hormones. Thyroid hormones are essential for metabolic processes, growth, and development, particularly brain development. Multiple studies have demonstrated enhanced potency of OH-BDEs relative to the parent PBDE chemicals, particularly for neurodevelopmental processes. Additionally, in fish species, thyroid hormones are essential for transitioning between larval, juvenile, and adult life stages. Therefore, studying the effects of both PBDEs and OH-BDEs during sensitive developmental life stages (i.e. larval and juvenile development) is warranted. The hypothesis of this thesis research is that PBDE metabolites interfere with thyroid hormone signaling (through interacting with thyroid receptor and deiodinase enzymes) which may result in decreased growth, morphological deficits, and altered neurodevelopment. The objectives of this research project were to evaluate the toxicity of PBDE metabolites and mixtures of PBDEs/OH-BDEs on larval and juvenile zebrafish development, examining both potential modes of action as well as functional consequences of exposure in developing animals.

In the first aim of this thesis research, structural relationships were examined between eleven different halogenated phenolic compounds (OH-BDEs, OH-PCBs, halogenated phenols, and TBBPA) to test developmental toxicity in zebrafish from 0-6 days post fertilization (dpf). In addition, follow up studies were performed with the most toxic compound, 6-hydroxy- 2,2’,4,4’-tetrabromodiphenyl ether (6-OH-BDE-47), to examine effects on TH-mediated morphological development and to better understand its mechanism of action in zebrafish. Thyroid disrupting agents including propylthiouracil, iopanoic acid, and native thyroid hormones were also used as positive controls for morphologic studies. Exposures to 6-OH-BDE-47 (10 nM to 100 nM) during development resulted in severe delays, similar to exposures from the T3 and thyroid disrupting agents. Lower jaw deformities and craniofacial cartilage malformations were also observed following exposure to 6-OH-BDE-47 at doses greater than 50 nM. Of interest, these developmental delays were rescued by overexpression of TRβ mRNA during the exposure period. These data indicate that OH-BDEs can adversely affect early life development of zebrafish and suggest they may be impacting thyroid hormone regulation in vivo through downregulation of the thyroid hormone receptor.

In the second aim of this dissertation research, neurobehavioral performance was monitored in larval and juvenile fish following a developmental exposure to 6-OH-BDE-47. 6-OH-BDE-47 has been identified as a neurotoxicant in previous cell based assays, and was identified as overtly toxic to zebrafish larvae in Aim 1 of this research. Developmental exposures (0-6 dpf) to 6-OH-BDE-47 resulted in decreased larval swimming activity at 6 dpf, with persisting impacts on behavior at 45 dpf. Young adult fish, when tested at 45 dpf, exhibited increased fear/anxiety response in the novel tank diving task and hyperactivity in a test of sensorimotor habituation. These data indicate that exposures to PBDE flame retardants and their metabolites during critical developmental windows can alter long term cognitive responses more than a month after the exposure has ceased.

Finally, for the third aim of this dissertation research, zebrafish undergoing larval-juvenile metamorphosis were exposed to a mixture of PBDEs (30-600 µg/L DE-71) and OH-BDEs (1-300 nM) from 9-23 dpf. Metamorphosis is a unique developmental period in fishes which is partially mediated by thyroid hormones. Juvenile animals, like larval animals, represent a sensitive and unique subpopulation of animals. At the end of the exposure period (23 dpf), a subset of fish were reared in clean water until 45 dpf for neurobehavioral testing. Fish samples were collected at 3 time points throughout the experiments, Days 12, 23, and 45. Tissue accumulation of test chemicals was monitored, and juvenile fish treated with the High Mixture were found to accumulate over 100 µg/g ww ∑PentaBDEs. The highest mixture treatment was found to be acutely toxic to zebrafish juveniles, resulting in >85% mortality within 14 days of exposure. Fish treated with 30 nM 6-OH-BDE-47 or the lower mixture exhibited reduced morphology scores relating to fin, pigmentation, and swim bladder maturation. In addition, reduced skeletal ossification and caudal area was observed at earlier time points with treatment to 6-OH-BDE-47. These alterations were accompanied by increases in chondrogenic gene expression, declines in osteogenic gene expression, and increases in thyroid receptor expression. Approximately 3.5 weeks after the exposure period, juvenile fish were tested on neurobehavioral tasks of novel tank exploration and sensorimotor habituation, however, no significant treatment related effects on task performance were observed. Collectively, these data suggested that the larval/juvenile development stage is a sensitive developmental window which can be adversely impacted by PBDE/OH-BDE exposure.